Jack Smith - The History of an Avon Historian

Filed by shanerogers March 22nd, 2014 in News.
AVON - Tucked back behind the Vintage House Cafe off of Detroit Road is a house not visible from the roadway. Shrouded by the shrubbery surrounding it is generations of knowledge on the city of Avon, and it's all kept inside Taylor "Jack" Smith's head, and also on his website,

Anybody who knows Jack knows him for a couple of things. One, he can tell you a great story and two, he has more knowledge on Avon history than just about anyone else around. This isn't surprising since he and his wife of 58 years, Carol, have been residents of the city since the 1930s. Carol was even physically born in the city, in her mother's kitchen from which she still has the birthing pail and keeps it upstairs.

Although, they may have spent some time away from their city due to college or the military, their permanent residency has never changed. What has changed though is the city itself, and Jack and Carol have a story, seemingly, for every huge transformation. 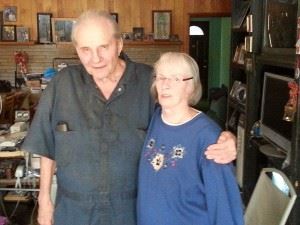 "I used to live in the red brick house out front and I used to ride my balloon-tire bike to Roy Cahoon's farm, which was just on the west side of the current Methodist church," Jack recounted while chuckling a little bit. He used to have to show up before 6 am in order to be able to pick strawberries on the farm. This is also where he met Carol for the first time who used to do the same thing, although he was quick to point out this was not the start of their romantic relationship; that part came later.

Jack ended up attending Harvard University where he received a degree in history and literature. According to Carol, he only came home on Christmas and that was when he would take her out on dates.

"He would send me letters that I couldn't even read because his handwriting was so bad," said Carol through a smile and a giggle. "I could see, 'Love Jack,' you know I guess that was good enough."

After college, Jack joined the military ahead of a tip that his name was going to be coming up at the draft board. By volunteering he was able to avoid basic training by passing an exam, which he did due to not having to field strip an M1, which he had never handled before, "because it was below zero and their fingers would have stuck to it."

Due to fluency in Spanish, the military assigned him to a base in Panama with an MOS Spanish interpreter. Being married to Carol at this point, she joined him down south where they lived off base and mostly just enjoyed the area.

"We basically had a two-year honeymoon," said Jack who only had to pull two official duties a month on the base. They even had their first of their [four living] children in Panama.

Upon moving back to Avon, Jack received his master's degree from Case Western in chemical engineering and ended up working for BF Goodrich for nine years. During this time, Jack never lost his love and thirst for history in general.

"For some reason I have always been really interested in history," he said. "I think the reason for that is that I have always had the desire to have some chance of knowing what is going to happen next. At least what are the possibilities?"

Now retired and at almost 80 years old, Jack still hasn't satisfied his unquenchable thirst to know about the past. According to him, every answer he finds only leads to new questions, especially in regard to Avon.

"Every generation knows there is a secret history of Avon," said Jack. "Stuff that never gets written down but sometimes gets transmitted orally and there are something's that never get talked about even though it is well known."

According to Jack, his website is more a personal scrap-book collection of his research and the different possible explanations of the history that he feels helps predict the future. It's his way to document all he has learned and to also share it with those interested.

"You know how some people collect butterflies? I collect theories," he said of his website, "I like alternative explanations for things."

People know two things about Jack Smith: one, he can tell a good story and two, he has more knowledge on Avon history than just about anyone else around. As for the man himself, there is much more to the story and it's obvious that Jack is part of the history that he so actively seeks to uncover.

As a child, my family would visit my Uncle Peter and my Aunts Blanche, Dorothy, and Martha Schwartz every Sunday afternoon from 1 to 4 pm. I usually brought my dolls and tea set to play house on the front porch or in an old building in the backyard. My parents would get a basket of eggs for the week. Sometimes I would walk to the barn to watch the horses drink water. I liked to hear the chickens squawk; and I had to be reminded once in a while not to chase them.

My aunts had books for me to read and a viewer to look at pictures. I could touch the piano keys very lightly. My Aunt Blanche played the piano. My dad would listen to the baseball game in the basement with Uncle Peter while my mother and aunts talked in the dining room. At home, my brother, Jim, would play the piano while my sister, Ellen, and I would harmonize to all the songs on the Hit Parade.

I also spent summer vacations with my uncle and aunts. One of my jobs was to go with Aunt Dorothy to the hen house to collect eggs from the nests in the boxes. We would always be on the lookout for snakes; this was thrilling for me because the nests were at the level of my eyes. Uncle Peter also had cows and pigs.

There was an ice box on the back porch where the cream would rise to the top of the milk. My aunts would put the cream into a churn and would push up and down on the handle until the cream turned into butter. They would sell butter and eggs to their steady customers who came to the farm on the weekends.

Uncle Peter had a smoke house where the pigs were hung. One year, when I was a little older, I had to test the new electric fence around the pig pen. There was a swill pail to feed the pigs. There was an outhouse between the pig pen and the garage. The corn crib was east of the pig pen; I liked to climb up and down the ladder and look in at the corn. I was a climber. I was always up in a tree.

I was fascinated by the new red cream separator which my Uncle Peter bought. There were two spigots for the milk and cream to come out. I was not allowed on the porch when the separator was running, and I had to watch through the screen door from the kitchen. It was lots of fun to run around on the farm. Much of it was made into a City park; and now my grandchildren sometimes play there.

She graduated from Avon High School Class of 1952. She enjoyed spending time with her grandchildren. She loved animals, but especially her dogs and cats. She was the caregiver for family members for several years including Helen and Evelyn Smith.

She was preceded in death by her parents, Carl and Helen (nee Schwartz) Smith and brothers, Jim Smith and Gene Smith.

All services will be private and are being handled by Misencik Funeral Home, 36363 Detroit Road, Avon. Private interment will be in Elmhurst Park Cemetery, Avon.